The purified plasmids produced in experiment BC039 were put through a dilution series and then used for PCR. pcDNA-HA-TRIM22 and pCAGGS-HA-TRIM69 were the two viable plasmids produced and the goal was to use the diluted plasmid to obtain an amplicon for TRIM22 and TRIM69. TRIM22 was unsuccessful, but PCR with TRIM69 appeared to pull out the 3 variants (A,BE, and CD) within TRIM69. 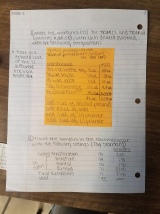 View all posts by lifeandbiology

Nicknamed "LaB", Life and Biology is a project initiated by Dr. Joel Graff. Here I share biology content for both my students at Montana Tech and anyone else that is curious about the topic. Feel free to snoop around the site and offer me any feedback you may have using the "Contact" page.
%d bloggers like this: