This paper is a summary of the article, Non-Human Primates Harbor Diverse Mammalian and Avian Astroviruses Including Those Associated with Human Infections. The purpose of this paper was to explore the idea that Astrovirus (AstV) infections are species-specific, meaning that human Astroviruses (HAstVs) can only cause infection in humans and avian Astroviruses can only cause infection in birds, etc. Through genetic analysis of sequences derived from a highly conserved RNA-dependent RNA polymerase gene, this paper provided solid evidence that non-human primates (NHPs) can harbor a wide variety of mammalian and avian Astrovirus genotypes, including those that are only associated with human infections1.

Astroviruses, along with the rotaviruses are the leading cause of gastroenteritis in children, the elderly, and immunocompromised people1. Astroviruses are small, nonenveloped, positive sense, single-stranded RNA viruses with a star-like appearance, that are transmitted through a fecal-oral route to a wide range of hosts, including calves, piglets, dogs, cats, and mink1,2. These viruses enter cells via adsorption to a receptor that has not yet been identified, and the virus is then internalized by endocytosis2. Although these viruses are most commonly known to cause diarrhea, they have also been found to cause a variety of diseases including nephritis, hepatitis, and encephalitis, or the virus can be asymptomatic depending on the species1.

Since 2008, the number of animal hosts shown to be infected with AstVs has quadrupled to include at least 30 mammalian species and 14 avian species with a correlating genetic increase in genetic diversity, which has led to the division of the Astroviridae family into two genera, Mamastrovirus (MastVs) and Avastrovirus (AAstVs)1. Even though AstV infection was thought to be species-specific, phylogenic analysis showed that a single host may be susceptible to infection with divergent AstV genotypes1. One example of this would be that humans can be infected with serotypes HAstV1-8, or recently identified serotypes HastV-MLB1-3, HMO AstVs A-C, and HastV-VA1-4 viruses1. The recently identified HAstVs are much closer genetically to animal AstVs than they are normal HAstVs1. However, diverse MAstV and AAstV genotypes have not been detected in any animal hosts, but potential human-mammalian recombination events have been detected, indicating that the species barrier may have been crossed at some point1. It is known that non-human primates are susceptible to a variety of serotypes of enteric viruses, similar to those of humans, such as rotavirus and norovirus, but there has been no data yet on this type of non-human primate and AstV relationship, which influenced the experiment this paper is discussing1.

In Bangladesh and Cambodia, multiple species of non-human primates including three types of macaques and Hanuman langurs have thrived for centuries on heavy interactions with human, by ranging freely through villages and religious sites and being found in captive settings1. Through analysis of sequences derived from the highly conserved RNA-dependent RNA polymerase gene, it was found that non-human primates harbor a variety of MAstVs, including genotypes previously only associated with human infections1. Additionally, the presence of antibodies to HAstVs further supports that thought that non-human primates are susceptible to infection by HAstV genotypes1.

Fecal samples were obtained from non-human primates in Bangladesh and Cambodia between 2007-2008 and 2011-2012 and the RNA was screened using a pan-astrovirus RT-PCR targeting a 422 length nucleotide segment from the highly conserved RdRp gene mentioned earlier1. Of the 879 samples taken, shown in the figure below, only 68, or 7.7% of the fecal samples tested positive for Astrovirus genotypes1. The results of table below show that there were positive results for the presence of HAstVs in all the different sample contexts from Banglasdesh and over half of these sample contexts tested positive for mammalian Astroviruses, while only one tested positive for avian Astroviruses. The results from the Cambodia samples didn’t provide much information, as there were only 6 positive samples obtained from non-human primates living in Cambodia.

A deeper look showed that the non-human primate that was tested, percent similarity to the closest identified sequence, and a proposed nomenclature for the identified genotypes. A preview of the table can be seen in the figure below, and the complete table can be found in the original article. It can be seen in the preview of this table that there is up to 88% similarity to HAstV1 genotypes, proposing the idea that these genotypes found in the non-human primates were actually genotype of HAstVs1.

The phylogenetic tree above shows that 11.7% of the samples were 79%-84% similar to HAstV, VA and MLB reference viruses1. Interestingly, these genotypes were detected in the non-human primates, in 2007, before the official identification of the viruses between 2008-20091. The non-human primate sequences FCB5, MCB35, and MCB37 branched off the human subclades of focus, forming a unique clade1. In addition to the non-human primate and HAstV relationships depicted in the following phylogenetic tree, the results show that 23.5% of the samples were similar to MAstV isolated from diverse animal hosts such as dogs, pigs, and sheep1. The last interesting piece of information that was obtained from the phylogenic tree sequence analysis was that 4.4% of the positive samples were clustered with AAstVs, however, the subclade formed for these AAstVs was distinctly different from the previously identified AAstV genotypes1.

From the phylogenic tree produced above, the data showing the similarity of the positive sample genotypes to the HAstV-1 reference viruses is so large that the results could not be shown in the original tree. An extension of the original phylogenic tree, which can be seen below in part A of Figure 3, focused specifically on the HAstV genotype similarities. Additional approaches were done to obtain more information on the positive sample genotypes. These approaches included genome walking, 3’RACE, and deep sequencing on all RdRp-positive samples1. As part of these extensive approaches, about 300 nucleotides were obtained from the 5’ end of MAStV/Hoolock gibbon/ Bangladesh/BG36/ 2007ORF21. An analysis of this nucleotide sequence showed a high relatedness between the non-human nucleotide sequence and a HAstV genotype1. Researchers were also able to obtain about 900 nucleotides of MAstV/Rhesus macaque/Bangladesh/BG31/2007 ORF2 and confirmed that it clustered in a clade that includes viruses obtained in cows, pigs, and deer1. The results for the 900-nucleotide analysis can be seen in part C of figure 3.

The results from these other approaches suggested that normal HAstVs and abnormal HAstVs such as MLB, VA, and HMO can be detected in non-human primates1.  The results from part A show that 60.3% of the positive samples were 98-100% similar to HAstV-1 reference viruses1. In addition to the high relatedness to HAstVs in part A, it can also be seen that non-human primate sequences BG31, BG41, and MBG260 cluster within known cow, pig, and deer RdRps if BG35 is excluded from the alignment1. The ClustalW of the BG36 nucleotide sequence confirmed that it was 84% similar to HAstV MLB1 capsid sequences1. It can be seen that BG31 capsid was shown to align within the cow, pig and deer clade mentioned above, creating the hypothesis that non-human primate BG35 is a possible recombinant AstV1. Below is a drawing of the possible way that a recombination could happen with this type of virus3. 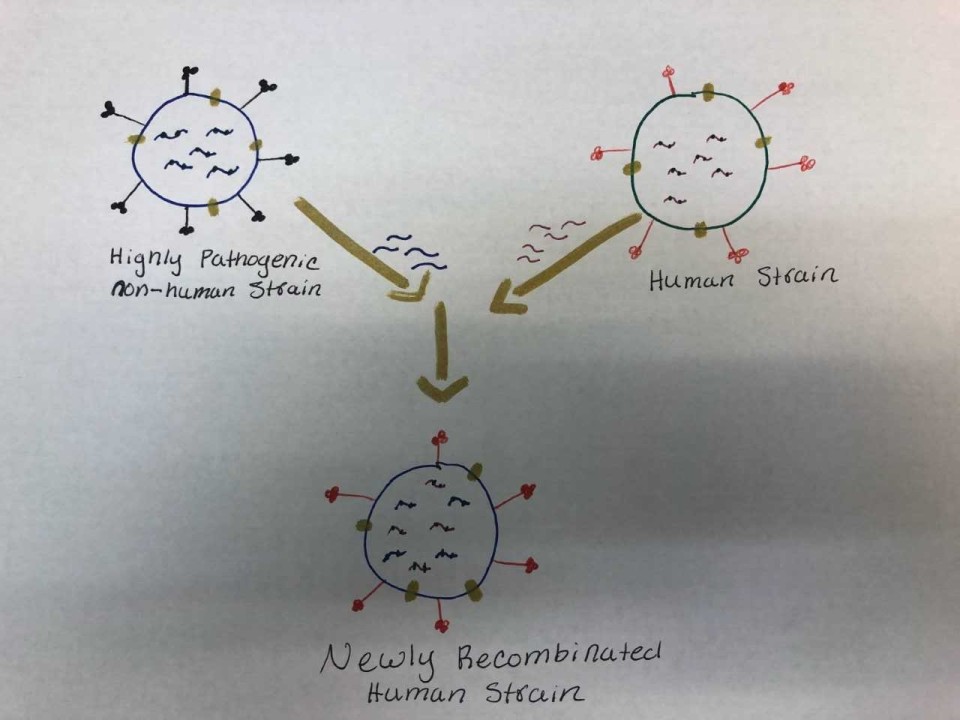 Figure 1: Drawing of the possible scheme that could occur for a virus of this type.

It can be seen that the recombinant has different aspects of both viruses, this type of recombination has a high probability for becoming highly pathogenic if one of the original strains is pathogenic itself and the virus is able to infect the host 3.

Lastly, it can be seen, that turkey Astrovirus type-2 (TAstV-2) is genetically distant from the mammalian viruses being observed and no TAstV like sequences were found in any of the analyses, so the TAstV-2 was used as a control AstV for the testing of non-human primate sera for the presence of antibodies against HastV-1 and MLB capsid proteins by ELISA1.

The studies of this paper provide solid evidence for the argument that non-human primates can harbor a diverse range of Astroviruses. An even more important idea that came from this paper was the fact that human Astrovirus strains can be harbored in non-human primates. The evidence that supports these ideas is that diverse AstV genotypes were found in the originally tested fecal samples, the high similarities to HastV reference viruses, the possible recombinants with other animal viruses, and the detection of HastV antibodies in a majority of the sera samples tested. The paper addressed some possible further studies, which are, to determine that HastV in non-human primates is due to actual infection and if such infections are asymptomatic or associated with a clinical disease1.

View all posts by lifeandbiology

Nicknamed "LaB", Life and Biology is a project initiated by Dr. Joel Graff. Here I share biology content for both my students at Montana Tech and anyone else that is curious about the topic. Feel free to snoop around the site and offer me any feedback you may have using the "Contact" page.
%d bloggers like this: