I recently met an incredible student from Butte High School, Ryan Tomich, who is interested in making small towns even better through the use of technology. I was fortunate to be a guest on his podcast dedicated to this subject. The questions led me to essentially give a brief summary of my career and also highlighted my recent switch to embracing computational biology in my research and teaching.

Upcoming episodes of this podcast will feature Janet Coe, who will discuss the new Nursing Simulation Lab at Montana Tech. Later, John McKee, will describe his experience with starting a distillery in Butte in Butte, which is aptly called Headframe Spirits. 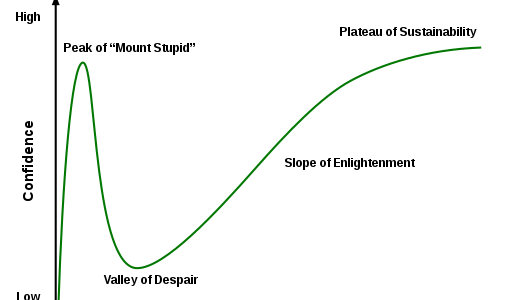 Computational Biology? Few of the resources that I describe here specifically address computational biology. My approach has been to first know biology and then learn computer programming while always having the question, “How can I apply this to my research?” in the back of my mind.

False Starts: After multiple attempts to learn a programming language throughout my life, the COVID-19 pandemic lockdown had the upside of letting me (finally) make progress using toward bringing computational biology into my research and teaching activities. So, roughly two years into my coding journey, I am emerging from the world of tutorials to the world of applying my knowledge to real-world projects and scientific problems.

What have the past two years looked like? Hours upon hours of both (on sale) Udemy courses and free tutorials. Learning any new topic can be a roller coaster nicely summarized by the Dunning-Kruger Effect.

Paid Courses: Udemy is my go-to source when I’m learning a new topic. Using the Dunning-Kruger Effect as a framework for thinking about my learning approach, I feel like the Udemy courses layout a roadmap for how to study the topic at hand. This way, I can look through the Udemy curriculum and skip past both the Peak of “Mount Stupid” and the Valley of Despair. That is, by seeing the road ahead, I accept that I am at the low end of the Slope of Enlightenment. Most of the courses I have purchased consist of at least 20 hours of curriculum and, because of this, they contain roughly a 3-credit college course for $12-15 when on sale. My course purchases went from a “vanilla” Python-specific curriculum to branching out into scientific Python, data science, machine learning, application development, computer vision, Git, and data engineering.

Free Stuff: I am impressed with the amount of free curriculum that programmers make available to the public. YouTube, GitHub, Kaggle, freeCodeCamp, and some material at Codecademy are the tip of the iceberg for freely-available resources for learning computer programming. From these sites, the two languages I have studied most are Python and JavaScript.

What’s next? I consider this journey as a lifelong learning experiment. My decades as a biologist and my newfound passion for computer programming will undoubtedly be a fruitful combination. While my first two years of this combination have gone largely undocumented, I am reminded of the saying, “The difference between science and screwing around is that, in science, you write it down.”

Questions to answer while watching this video:

Understandably, there has recently been an increased interest in viruses. Here, we will tie our discussion of the Central Dogma of Biology to viruses. The typical flow of genetic information from DNA to RNA to protein is often modified by viruses, which have a variety of genome types.

Building off of the Central Dogma of Molecular Biology episode, we take a close look at RNA and the many functions of these molecules in a cell.

The Central Dogma of Biology provides a foundation for molecular biology. This video goes over the general flow of genetic information, enzymes involved in the process, and an intro to thinking about controlling the rate of each stage.

For Animal Stories for Kids

Buster Bear was having a lazy day.  But as the sun reached higher into the sky, his fur started to get hot and his stomach was starting to growl.

Slowly and methodically, Buster Bear started to head downhill to the Laughing Brook.  The movement felt good to his well-rested muscles and the water ahead looked inviting.

As he approached the Laughing Brook, Buster noticed that he wasn’t the only one that had thought about having fish as a mid-morning snack.  Once he was close, he realized that it was Little Joe Otter.  He also came to realize that the otter had been successful.  Little Joe Otter had a nice big trout in his mouth!

Buster Bear crept up to the unsuspecting otter and snarled.  As you can imagine, poor Little Joe Otter panicked at the sound, dropped the fish, and dove into the nearby water.

“Just as I had hoped!” Buster Bear thought as he pounced on the trout before it flip-flopped its way down the stream bank.

Buster Bear stubbornly stood there and eventually said, “If you would like the fish back, just come get it.”

This did nothing to get Little Joe Otter to stop his unblinking gaze, so Buster Bear repeated his half-hearted offer.  “Come get your fish if you want it.”

Furious, Little Joe Otter dove under the water and slipped downstream until he met Billy Mink.  It didn’t take long to tell Billy about his encounter with Buster Bear.  Billy Mink listened to Little Joe’s tale and nodded sympathetically.  However, being a practical sort of animal, Billy Mink could only say, “There’s not much you can do about it, is there?”

It was clear that one fish did not satisfy the lazy bear’s appetite, so Buster Bear was progressing from one deep pool to the next.  Little Joe Otter picked up on Buster’s plan and moved quickly into action.  He first went to the pool Buster Bear was going to next.  Once there, he swam at a frantic pace in circles to scare away the fish in the pool and disturb the mud to make the water murky.

Buster Bear fished unsuccessfully there for a while and, discouraged, moved on to the next pool only to find the conditions to be similar.  All day long, Little Joe Otter sabotaged the lazy bear’s fishing.  Buster Bear’s stomach continued to growl and Little Joe Otter’s stomach joined in the chorus.

Biology connection: Food resources, like fish, are prized by many different types of animals.  The battle for food is called competition.  The population size of one type of animal is often limited not only by the amount of food in an area but also by whether other types of animals eat that food, too.

Nicknamed "LaB", Life and Biology is a project initiated by Dr. Joel Graff. Here I share biology content for both my students at Montana Tech and anyone else that is curious about the topic. Feel free to snoop around the site and offer me any feedback you may have using the "Contact" page.
Life and Biology
Loading Comments...